﻿
A Re-run  - No Problem (You think?)
﻿
In the first run of any model, the complexity of the manufacturing process involved would lead you to expect problems and delays of all types. Eureka has had its share of these delays ranging from skill shortages and component delivery delays through to massive up-heaval due to forced factory re-location.
However, when it comes to a re-run of a model one could be forgiven for thinking that the process will be both more straight forward and quicker to carry out. Experience is showing that this is not necessarily the case.
Three of Eureka's first four projects are currently undergoing re-runs. These are the 620/720  2 car diesels, the 38 class and the LCH/CCH 4 wheel coal hoppers. The AD60 re-run was delivered several years ago but the re-run process for that model took two years.
The re-runs mentioned above have been complicated and delayed by the need to retrieve the tooling from the old factory and to relocate it to our new factory. This recovery process took more than a year and is not yet fully complete. (Those interested should check out the Atlas web-site for a report of their experience which involved shifting 5000 tools and took over two years and a massive interruption to production. It has been estimated that this would have involved over 100 truck loads.)
With the arrival of Eureka's tools at the new facility the next step in the re-run process could begin. This involved what is referred to as proving the tools. This in effect is a trial squirt to test that the dies are not damaged and that they will "fit" on the different injection machines at the new factory. All of this by the way involves costs. At this stage any missing tools are discovered and decisions on their replacement have to be made, again at a cost.
The result should be the items shown in the accompanying photos. 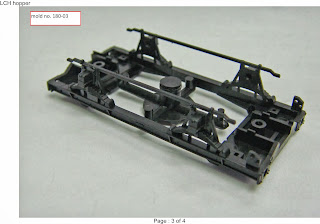 Once the proving is complete outside sourced items can be ordered and the full assembly process can proceed.  At this stage the factory is also able to provide up-dated costings for a project and with the additional costs mentioned above a final price for the model can be determined.  The costings for the first run of the LCH/CCH were determined in 2008, five years ago. The quotation for the re-run involves a 52% increase over the 2008 costs which is in line with the approximate 10% per annum increase the factory has suggested should be expected. 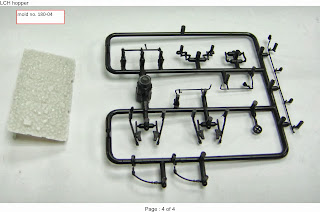 Where does all of this leave the re-runs program?

38 Class: The re-run process will be lengthened because it has been decided to re-design the chassis so as to incorporates the gear drive type mechanism which is proving to be so successful in the R, K and 50 class projects. Anticipated delivery third quarter 2014.

PS: The Eureka team will be journeying north to the factory on the 8th of September. It is likely that there will be a major announcement when the team returns and there will certainly be up-dates on current projects.

Posted by Eureka Models at 3:15 PM No comments: