BACK TO WORK! - The MCEs

After almost no activity for the past twelve months it is time to get things moving again. (The factories in China are gradually getting back to normal)

The recent publication of the latest edition of The Eureka Times (36th edition) started this process and there are a few items that can go up on this blog over the Easter weekend.

Recently, work commenced on the next pair of cars in Eureka's NSWGR 12 wheeler series.

These will be a version of the standard TAM sleeping car in its early appearance with crown lights and tongue and groove siding and available in the early varnished timber livery and a second class sitting car in two variations, the MCE/MCX cars.

All of these are on the order form available from the Eureka office and being distributed with ET36.

As usually happens when a new project is being discussed some interesting information comes to light. The MCE/MCX cars usually are associated with overnight trains but the accompanying photos were received from a contributor (thanks Michael) showing the use of an MCE car on a not-so-usual regular service. 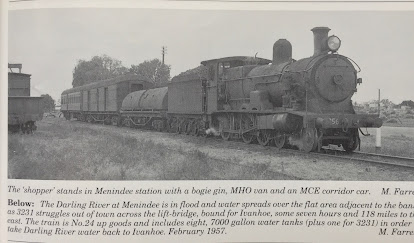 Taken by M. Farrer in 1957 the shot shows the use of an MCE on the shopper train which ran between Menindee and Ivanhoe. Also in the consist is a MHO van and a bogie water gin to supplement the Ivanhoe water supply and in the process make up a very unusual but intriguing train.

The challenge of fitting such a movement into the timetable on the Barraba branch on Werris Creek is already proving a lot of fun but will no doubt be worked out by the time the cars arrive from the factory at the end of this year.

Posted by Eureka Models at 9:37 PM