Progress on the 40 class is going ahead quickly at the factory and is just following the normal assembly process. However, on the other side of the Pacific at QSI work on the sound installation is also well underway. The sound decoders were manufactured in China previously and the first step in the installation process is to check fit the decoder. The above photo shows this process with the decoder being trial fitted to a chassis from the current production run. These are identical to those produced by Sanda Kan all those years ago so it was not surprising that the trial fitting did not produce any problems.
The next step in the sound process is to burn the sound files into all of the decoders. After this the decoders are fitted to a mounting pcb and then they are forwarded to the factory in China for assembly into the "with sound" 40s.
Back at the factory in China injecting is underway and decoration (painting) of the parts is taking place as parts are received from the injection sub-contractors. Injection is expected to be completed by the middle of April after which decoration will be finished and final assembly completed.
The Eureka office now has several running non-sound samples and is expecting a sound-equipped version from QSI any day which will be most enjoyable. The non-sound running samples at the Eureka offices are superb. They are smooth running and are very quiet. With this quality base the sound versions should also be of a very high performance.

The above art-work is not final as there are minor corrections to be made including adjustments to the numbering. The above workings were mainly used to get the main body colours right.
Squirting is under way and will be finished in April. Decoration is also under way and is expected to be finished in May.
Also coming with the production run of the 40 class will be spare wheel sets complete with wheels, axles and gears. (An expanded coverage of the problem of this topic can be found in The Eureka Times 32.)  Price is not finalised yet but will be around $25 for six complete wheel sets.
The final price of the 40 class ($330) now applies 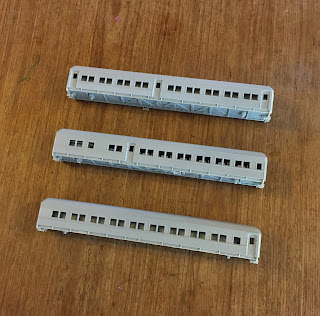 Bodies, interiors and underframes for the three cars.

Received from the factory the last week in March is a complete set of injections for the MAL sleeper, ACS Composite car and the AB dining car. These three cars are the second offering in Eureka's series of 12 wheelers, the first being the NCR sets.
The same high quality and accuracy as the NCR sets, these samples have gained the tick of approval of all who have seen them. The factory has been advised accordingly and the likely program for these cars involves squirting in April, decoration (painting) in May and delivery in June.
Given that the previous planned delivery date was September, in time for the October Exhibition, a June delivery date would represent a considerable advance in delivery time for the project. It also augers well for the rest of the Eureka program as the factory works its way at speed through our outstanding and new projects.
Due to a number of requests, coming with the three cars will be a number of complete under-frames including KD couplers and wheel sets. Price is $40 per under-frame. Numbers will be limited and pre-orders are advisable.
Also coming will be more wheel-sets as with the NCR sets.  These went very quickly and so again, pre-orders are advisable. Price is $25 per wheel-set.
For an order form for any of the 12 wheelers contact the Eureka office. Pre-order price is currently $125 per car. This will increase to $155 per car after 30 May, 2017.


Posted by Eureka Models at 7:07 PM No comments: